The action starts. The woman prepares the scene.
She isn’t ready yet. She needs to change her clothes, comb her hair, put on some make-up.
She gets ready up on the ropes.
What is she looking at? What is she waiting for?
She does not know yet. The answer is in balance:
Her crossing, hat and cane. Her magic crystal ball. Her tango song.
The high hills that she will wear to challenge herself.
The children that she will invite to play with her juggling clubs.
The giant bubble that she will create.

Maria Celeste Zalloechevarría is Espuma Bruma, a street circus artist specialized in the tightrope and giant soap bubbles. Born in Mar del Plata, Argentina, she was graduated from the Circo Criollo School- Buenos Aires, Urban Arts School- Rosario and the National Circus School (ENC) of Rio de Janeiro/Brasil.
In 2013 she moved to Rio de Janeiro and got into ESLIPA - Escola Livre de Palhaços (clown school). She attended classes with Lily Curcio, Mauro Bruzza, Esio Magallanes, Breno Moroni e Pepe Nuñez and João Carlos Artigos –Teatro de Anônimo, among others.
In 2015 he formed with other artists the Collective of Circus Creators, a group of work to construct five solos of collective way. Thus and through the Program of Promotion to the Carioca culture begins a process of investigation with the direction of Fabio Freitas - Teatro de Anônimo and together they create AlfonsinA.
Since 2010 she went with her single show “rOdandO" to festivals in Argentina, Peru, Uruguay, Brazil, 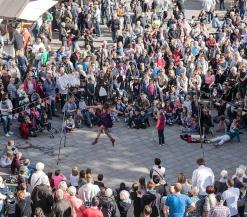 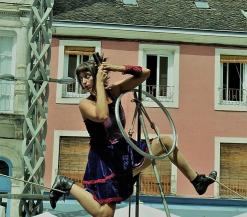 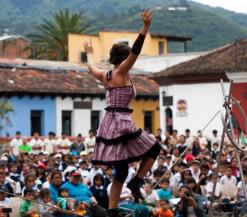